The ASX200 is down 4 points in early morning trade. Yield sensitive companies some of the worst performers after US bond yields continued to march higher overnight. James Hardie (JHX) narrows guidance, Telstra (TLS) makes impairment charge and Woolworths (WOW) gets an upgrade. 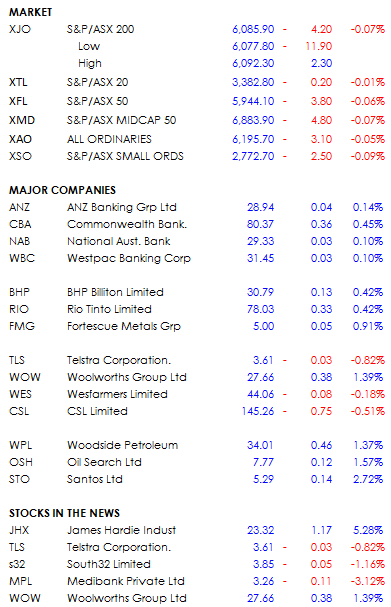 “Our group results for the nine months reflected marginal top line growth, as well as EBIT margin and Adjusted NOPAT that were below our expectations. However, we expect performance in North America to continue to improve throughout fiscal year 2018.”

Guidance: Notes analyst FY range US$267-278, Company expects US$260-275m (lifting the bottom of its range from $the prio forecast of $245m.  Cautious about the outlook though.

BEST AND WORST PERFORMERS UNDER A RISING BOND YIELD SCENARIO

With bond yields rising and the US 10 year yield approaching the Aussie, though it was interesting to look at the potential winners and losers in the market. From Credit Suisse – “Those stocks that have under-performed the most when bond yields have increased tend to have a combination of high price/earnings ratios, high payout ratios and weakening growth prospects, or are gold producers.”

CS forecasts a 10 year yield of 2.9% by year end (2.71% currently) but says that bond yields won’t overshoot too far because of increased US bond issuance (to finance the latest tax cuts), and reduce purchases from the Fed, PoBC and ECB (as they decreases balance sheets)