Australia’s national accounts were released last week. At a headline level, growth as measured by GDP disappointed most economists’ expectations, rising just 0.4% in the December quarter to be up 2.4% for the year. This represented a slowing from the 2.9% growth recorded in the year to September.

The biggest positive contribution came from growth in household consumption, which rose 1.0% in the quarter due to strength in discretionary spending on hotels, cafés and restaurants and recreation and culture. It was the largest quarterly increase since mid-2016 and a positive result considering weak wages growth and poor readings for retail sales and consumer confidence. 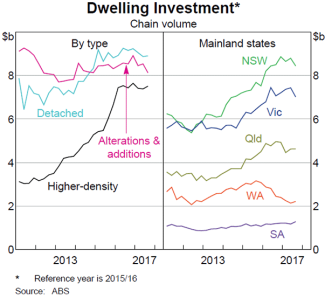 The pull-back in dwelling investment is a trend that has been underway for the last twelve months, and is partly a result of tighter lending standards imposed on banks by the Australian Prudential Regulation Authority (APRA). The first of these measures was a 10% cap on growth in lending for housing investment, first introduced in December 2014. In March last year, APRA introduced another lending restriction, limiting the proportion of new lending for borrowers repaying interest only to 30% of new lending. These two dates correspond with the 2 peaks in housing finance for investment (the green lines) in the chart below.

The tighter measures were aimed at improving bank lending practices, to limit excessive growth of investor lending and ensure serviceability of loans. The major banks responded to the new measures by restricting lending to investors, limiting the issuance of interest-only loans and by raising interest rates on certain loans independently of moves in official interest rates. This is shown below in the purple line, which has ticked up despite stable official rates (the red line).

There are other factors at play in the fall in dwelling investment, including changes in Chinese investment rules and Australian changes to foreign ownership which have led to a decline in foreign demand for newly built properties, but the restrictions on investor and interest-only lending growth have been the major factor.

While the purpose of the tighter lending standards was to improve lending practices, there have been a number of flow-on effects. One of these is the “void” created in property financing. The major banks have reduced the available capital for project development and project financing, leading to a dislocation in the market and creating a number of very attractive investment opportunities for providers of senior lending.

The returns are impressive due to the lack of competition for financing alternatives, while the risk profile of senior lending is also restricted due to the priority ranking of senior debt and the prudent investment criteria applied – such as high loan-to-valuation ratios and a focus on properties and projects in areas of strong organic or underlying demand.

Another key outcome of the tighter lending criteria has been the pull-back in housing price growth. While not the stated objective, APRA and the RBA – and a host of other interested parties – have previously voiced strong concerns about housing affordability in the context of weak income growth and high and rising household debt.

In its February Statement of Monetary Policy, the RBA noted that conditions in established housing markets continued to ease in the second half of 2017. The moves were most evident in Sydney, where housing prices have declined and auction clearance rates are below their decade average, while in Melbourne, housing price growth has declined and auction clearance rates have trended lower in recent months. Other cities of interest due to recent weakness include Perth, where housing prices were flat in the last quarter of 2017, and Brisbane, where apartment prices have stabilised following earlier price falls and detached house prices have increased slightly.

The RBA noted that in Sydney and Melbourne, the decline in house prices was most notable for detached houses and for the most expensive properties. 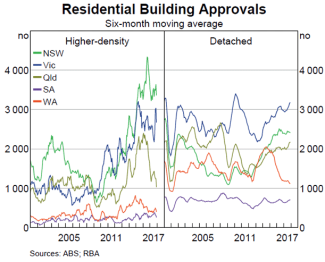 While housing affordability is a major issue and authorities have cautioned about speculative asset prices, a significant fall in housing prices would put added pressure on household balance sheets – not to mention the health and stability of the financial sector – and so an orderly and managed easing of prices is the best interests for everyone.

And this “Goldilocks” scenario is a distinct possibility.  Underlying demand is being supported by population growth and high levels of immigration, and the value of housing loan approvals has stabilised, supported by a composition shift in credit growth towards owner-occupiers and away from investors. On the supply side, the oversupply in certain pockets of the market appears to be correcting. Approvals of higher-density projects in NSW and Queensland in particular are coming off, and markets are moving towards more balanced levels. 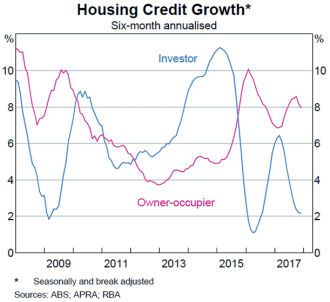 Comments by APRA and the RBA suggest that the influence of the tighter lending criteria on bank lending practices has been successful and the impact on dwelling investment has occurred more quickly than expected. Average lending growth to investors has fallen to around 5%, or around half the level of the current cap, and APRA has indicated it is ready to lift this restriction because mortgage lending appears to have improved sufficiently. The more recent restriction on interest-only lending is less likely to be lifted however, particularly as the impact of maturing “interest-only” loans transitioning to “principal and interest” loans is yet to be fully assessed.

A further key outcome of APRA’s lending restrictions has been a reduced need for the RBA to tighten official interest rates, and this is a key factor in terms of supporting an orderly property market, promoting investment in other sectors of the economy, supporting household consumption, and stimulating jobs growth.

At this stage, there appears to be few losers from the tighter lending standards, with the exception of some home owners in the higher-end and high-risk segments. Housing prices should stabilise in an orderly market, household balance sheets should recover and the strength of the financial sector will improve as a result of more prudent lending practices. The significant structural shift in the lending market will also continue to provide opportunities for investors to take advantage of the attractive returns and low-risk profile available through senior lending.