Skip to content
May 3, 2018 Posted in Economics, Financial Markets

The RBA released its monthly Chart Pack yesterday. It’s a great resource and I highly recommend it. You can find the full pack here (https://www.rba.gov.au/chart-pack/)  but I’ve selected a couple the attracted my attention.

Global GDP – Showing that the European recovery is stagnating. It means the “synchronised global growth story” is potentially at risk.

Western Australian recovery – The rebound in the WA demand has helped drive overall growth but it looks to also be stagnating. 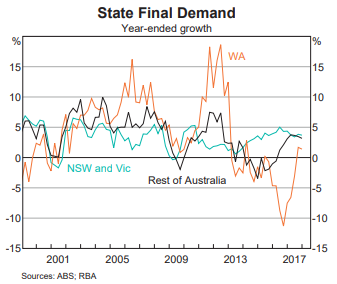 Inflation has been held back by international forces

From the RBA about tradeable versus non-tradable inflation – Non-tradable items are exposed to a low degree of international competition. This includes many services that can (in most cases) only be provided locally, such as hairdressing, medical treatment or electricity. The prices of these items should be driven mainly by domestic developments.

Therefore, inflation for non-tradable items should provide a relatively good sense of the extent to which demand exceeds (or falls short) of supply in the domestic economy. In contrast, tradable items are much more exposed to international competition.

This includes many imported manufactured goods such as televisions and computers, as well as some food items and services such as international travel. The prices of these items should be less influenced by conditions in the Australian economy, and more affected by prices set on world markets and fluctuations in the exchange rate. 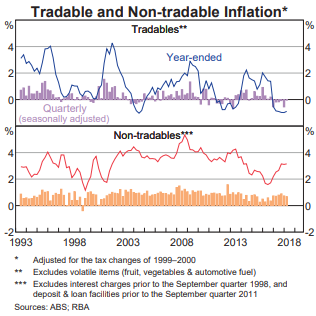 Savings Rate: Disposable income has ticked up but consumption is flat, resulting in an increase in the savings rate…yippee!!! 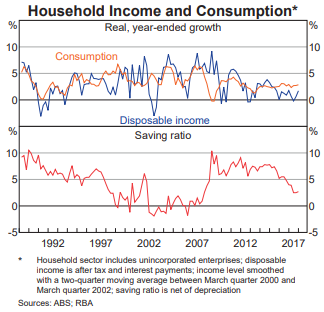 Approvals – Doesn’t include today’s data but the story is still relevant. Demand (approvals) for detached housing has been relatively stable. Higher density housing has been the major source of new supply. It’ some back a bit but still very strong from a historical perspective.

Mining Investment – Despite some big mining companies increasing the CAPEX estimates, the over-riding numbers show continues falls in mining investment ahead. And this is important – mining investment is the biggest share of business investment (about 29%) 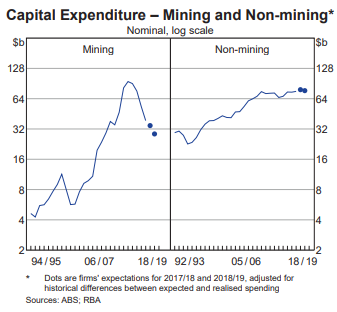 Speaking of wages – tick up and now at 2.1%. The key concern is underemployment, which took a long time to head down relative to unemployment. It only started to ease last year and there’s a long way to go. 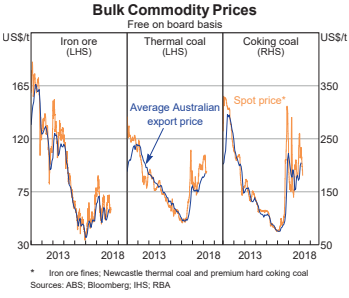 Aussie-US bond yield differential – will the trend continue or will normality resume.

Housing interest rates – the actual rates being charged starting to edge up despite RBA rates remaining on hold. Banks are saving the RBA from having to tighten conditions overall. 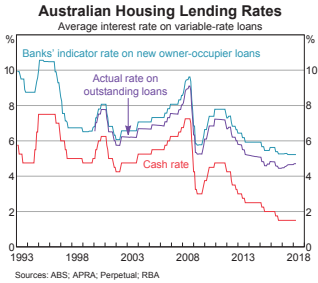 Earnings expectations – Analysts have consistently revised down EPS forecasts since the 2008/09 (2010/11 exception). Things are looking good for this year

Bank Funding Costs – The Banks source around 60% of the total funding from domestic deposits. Rising international rates (particularly US rates), if sustained, may flow through to higher mortgage rates domestically. This “warning” was provided by RBA Governor Philip Lowe earlier in the Week. 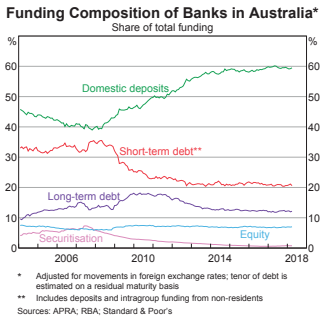