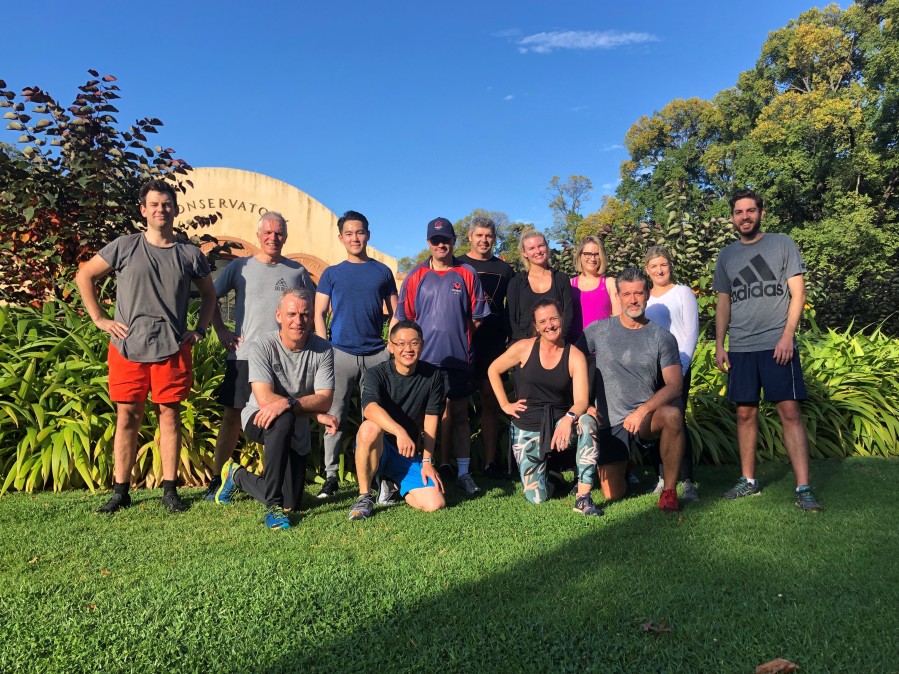 Today marks the day. The official start of the Merricks Capital training sessions. 0800 (Harry is ex-army so its 24 hundred from here on in). On time is late. With the exception of a few pikers (who shall remain anonymous in this report but who are at the pointy end of the corporate org chart shall we say) we are off and running (ok brisk strolling) to Fitzroy Gardens.

All is going well and the mood is bright…and then panic sets in. Warren (middle of the pack in the photo) – who forgets that we have to dodge the ordinary folk who aren’t about to kick some huge fitness goals – runs smack bang into a not-so-friendly guy who decides this is clearly worse than Notre Dame burning to the ground and offers his opinions about where Warren should go for his post-Run Melbourne celebration vacation.

I am so caught up in the drama that I miss the athleticism on display as Lucas (red shorts in the photo on the left) kicks the footy (Harry’s prize possession but more on that later) into the bushes. And bushes really doesn’t do justice to the jungle thingy place that said ball is engulfed in, but you get the picture.

Harry puts on brave face. Footy hand-eye coordination skills training was supposed to be part of the session, but we are clearly moving on to PLAN B.

Therein starts the “up”s. As in push “up”s, sit “up”s, get “up”s. 4 sets of 5. What is a get-up I hear you ask? Well that is a very good question. It’s a terribly complicated fitness exercise that involves…well… getting up. As in going from a prone (face-up)  position to a standing position, in whichever way works for you. Apparently, it is a “functional” exercise. Harry’s words not mine. I suspect that what he really means is that after about 10 of these things it’s very difficult to function. But “get-up” we do.

Did I mention I’m just a tad competitive? Yes well I may have done some of those push ups on my toes which means I won’t be able to get dressed tomorrow…but let’s worry about that tomorrow shall we.

Oh and then there were burpees. I shall leave that right there because everyone knows that whenever the word “burpee” is mentioned, a minute of silence is warranted.

And then it was off for the running/walking part of the training. And we split to do our own thing. This is a wise move as the variance of fitness in the group (and I’ve got an actuarial degree so I’m using the statistical definition of variance here) is not insignificant.

Mike (bottom right) is so fit he has just been chosen for some NSW masters rowing team thingy. The specifics aren’t important. This man is up at the crack of dawn several mornings a week in the middle of winter to get in a boat and row for a couple of hours…for no good reason. I spied Mike doing hill reps. Daniel is a swimming champ, Adam does cross-fit classes on a scarily regular basis, I suspect Belinda might be doing some yoga in her non-Merricks spare time, Jimmy heads off to the gym on occasion and Lucas attempted to kick the footy (so a level of fitness on his part was clearly presumed, even if not demonstrated).

Others among us were not so aerobically capable. And that’s fine. It was all about fun today. And we had lots of fun.

As did the poor volunteer we commandeered to take our team photo. And what a great job he did!

And as did the amused onlookers who watched as we formed a police search line in Treasury Gardens to trawl through the “bushes” to locate Harry’s footy. Nothing like a police line search event to create a team building vibe. Especially when it involves getting up close and personal with the local arachnids. And especially when it’s met with a win. Footy located. Back to the office for showers and another day of being part of the very special Merricks Capital team. Run Melbourne here we come. 103 days and counting…

Totally not related to sport, but wanted to also mention that Tuesday night is “movie night” at the Classic Cinema in Elsternwick with my 17 year old daughter. Tonight, it was The Aftermath with Keira Knightley and Alexander Skarsgård. I happen to be crazy madly in love with both actors (Bend it like Beckham is one of my favourite films…you know, girls playing sport and stuff can be commercial) so it was pretty much guaranteed that I’d love this movie with them together. Yes it was soap, but we are talking very high class, sophisticated and creatively filmed soap with incredibly beautiful floaty bubbles. Loved every ordinary moment.